With Mr. Stuewe out for surgery this week, journalism student, Maddy Harbison, penned this profile 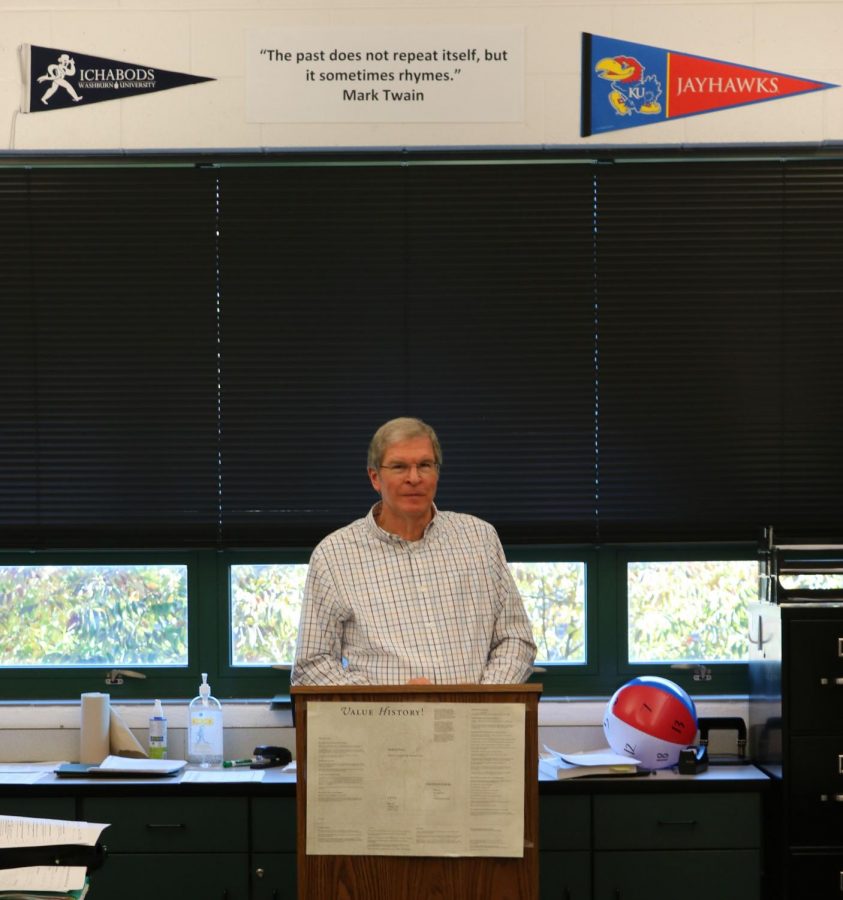 Soldier, legal clerk, factory worker, teacher, farmer, handyman, construction worker, traveler, he is the most interesting man in the world. And many know him. Social studies teacher Paul Stuewe has served many roles.

“My parents taught by example so we acquired a strong work ethic; get up early, work hard.” Stuewe said.

Stuewe grew up on a farm in the Kansas Flint Hills. In contrast to his current students, Stuewe attended a small high school of only 40 students. He enjoyed school, played three sports, and worked hard to get good grades.

“Every generation is affected by their environment.” Stuewe said.

Being raised in the ’50s and ’60s shaped his. Growing up during the Cold War nuclear conflict, Stuewe participated in Duck and Cover drills. The idea of entire cities being wiped out in a single moment had an impact.

“After graduating from college, I went to Europe and traveled around with a backpack,” Stuewe said. “No one knew where I was for over two months.”

Upon returning from his travels, Stuewe was drafted into the army during the Viet Nam War and became a legal clerk in a battalion headquarters in Europe. When he came back home he attended graduate school at the University of Kansas where he received multiple degrees.

Initially, Stuewe wanted to become an attorney but decided to become a history teacher. He wanted to be able to interact with people about history – something he had and continues to have a great interest in. Stuewe believes it is important for teachers to have life experience before they begin teaching. He has taught for 41 years.

“I was 26, I had been in the army, I had lived in Europe and I had attended grad school when I became a teacher.” Stuewe said.

Stuewe has a wife of 36 years named Beth and a 32-year-old daughter named Liz. He lives a very interesting life and has many more opportunities ahead of him.

“I’d be a much different person had I not grown up on a farm, had I not been drafted, had I not done all of these different things.” Stuewe said.