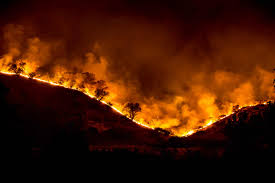 The bright red color overtakes the sky and ashes are woven into the air making it hard to breathe and to see. That’s the reality for the millions of people living in
Australia since September. Currently, billions of animals and thousands of people are suffering in Australia due to the bushfires. According to CNN, the fires have spread across 17.9 million acres of land, with the death total reaching 28 people as of Jan. 13, 2020.
These fires sparked a deeper look into our environment and a deeper look into climate change. Climate change has been around in the news for the last thirty years and isn’t a new phenomenon. The cause of climate change can be boiled down to humans excessively burning fossil fuels which is creating greenhouse gases that trap heat in Earth’s atmosphere. This raises the overall temperature of the Earth and contributes to the wildfire issue.
In the United States, California has been the target for many wildfires in the last couple of years. While wildfires are not something new to California, the intensity and amount of fires in the state is. Climate change has made wildfires much easier to spark and to continue burning.
Similar to California, Australia has become hotter and drier which ultimately made wildfires spread faster and more intensely. Since 1950, Australia’s national temperature has increased by 2.7 degrees Fahrenheit per year adding to dry conditions and making fire season increasingly worse.
J.J. Quillin, BV West’s AP Environmental Science teacher, discusses the subject of wildfires in his classes and understands how natural fires work.
“The increased temperature makes things dry out more, making them more susceptible to burning,” Quillin said.

“Fires are then more likely to start and when they do, there are more dry materials that extrasterbrate, and that makes it more intense.”
While the bushfires in Australia are known for causing harm to people and their environment, Quillin explained how the naturally occurring fires can actually be beneficial to the environment and almost necessary to keep it lush.
“[Wildfires are] necessary for many ecosystems to thrive, fire cleans the slate and there are many organisms that have evolved to withstand them,” Quillin said. “Naturally, ecosystem’s are designed to withstand [a fire]. “Basically, if there is an ecosystem or environment that can burn, it probably has adapted to withstand it and [fires are a] part of keeping it healthy.”
While the natural wildfires are necessary to the ecosystem, most people believe these wildfires are too big and too out of control. Instead, these fires are evidently no longer helpful but now, harmful.
Many people, such as the American firefighters that flew into Australia in Jan. 2020, are rushing to help extinguish the fire, but Quillin said these actions sometimes do more harm than good. By trying to put out the fires, humans can actually cause that specific area to be more flammable.
“Humans have prevented the fires and in preventing them, we have made them worse,” Quillin said. “Since humans have moved into these places, we’ve always tried to stop and prevent [fires]. What that does is build up more biomass that is flammable.”
Quillin suspects that the firefighters’ goal may be to monitor the fire instead of attempting to put it out. They might also want to know which direction the wind is going and where the fire is moving to hopefully get to sensitive areas and protect them.
While these wildfires might help cleanse and renew the environment, they also hurt both Australian residents or others with a connection to the country. Senior Dani Ferrigno lived in Sydney, Australia for three years before moving to the United States and eventually Kansas. She still feels very close to the fires and feels like they affect her, even if they’re almost 10,000 miles away.
“The place I once called home is currently on fire. I feel like my hands are tied and that there is nothing I can do to help but donate money to local organizations that are bringing relief for the fires,” Ferrigno said. “I remember all the times I went to the Taronga Zoo in Sydney and saw kangaroos and held koalas. To know that these are the same animals that are being deprived of their home and literally burned alive [because of] climate change, breaks my heart.”
Ferrigno believes that not only are the fires much worse than most people think, but people aren’t concerned enough about the implications of this destruction.
“When I think about situations like this, I think about how people raised over a billion dollars to help rebuild the Notre Dame,” Ferrigno said. “Think about how much relief and recovery the people in Australia would get if the same amount of money was raised for the wildfires.”
There are celebrities that continue to donate to the fire relief cause such as Nicole Kidman, Keith Urban, Chris Hemsworth and many more both from Australia and from around the world. People like Bindi and Robert Irwin, are even helping to evacuate the animals who have lost their homes
On a larger scale, teen activist Greta Thunberg continually attempts to reform climate change laws and spark action in order to help the world. From striking out Swedish Parliament to giving speeches at the United Nations, Thunberg wishes to inform people about the larger issue with the environment and find ways to prevent tragic events like wildfires in the future. Overall, people like Thunberg simply want to improve the situation and help others.
“Climate change is a real thing that is happening and it is having real consequences on the environment,” Ferrigno said. “Over a billion harmless animals have been burned alive in Australia and are suffering as I type this. Australia needs our help.”