2021 Football Season Comes to an End 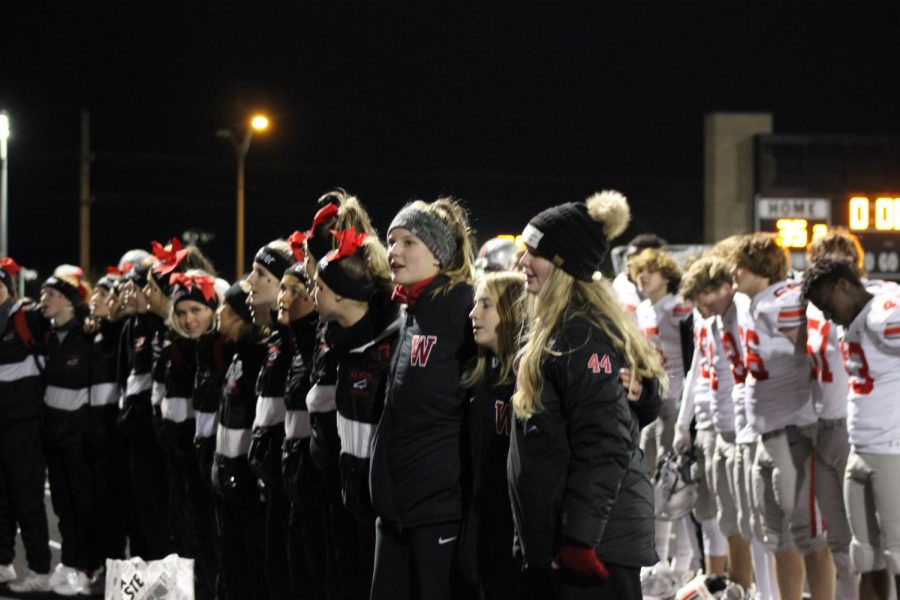 On Nov 19, the football played their final game of 2021. The team won seven of 12 games this season. In their final match-up against BV Northwest, BV West fell 35-7. The senior players wished their classmates farewell to Friday night football.

The underclassmen players saw their seniors say bittersweet goodbyes to practices and post-win celebrations. The seniors were incredibly emotional that night. This team was the fifth Jaguar team to make it at least this far into the playoffs. This achievement relieved the players from their losing record of the year prior; the spirit that was curated after a lack of crowd from the COVID-19 pandemic propelled the team.

“We had nothing to lose. All of the seniors this year had a bad taste in our mouth from last year,” senior Charlie Mahony said. “All off-season and summer, we worked as hard as possible to have a better season, and that hard work paid off.”

Mahony and several other seniors fought the school board to be allowed to play in 2020 but endured a team quarantine and never quite gelled. Despite a lack of respect for the team in 2021, they notched win after win.

“Our Jaguar football team was predicted to be one of the worst teams in our league and were always the underdogs every week,” junior Zach Darche said. “But we didn’t care, and we did our thing and ended up going to the state quarterfinals.”

2021 is the inaugural season for the on-campus stadium. The stadium held its first game, BV Southwest against BV West, leading to the Jags first win of many.

“Even though we weren’t the home team, the atmosphere on our side made it feel like it,” said Darche. “Plus, it was a great team win, especially coming off a one-win season last year.”

The liveliness of the student section revived traditions for the football team and student body.

“Our student section [is the] energetic heartbeat of our team and [believed] in us when no one else would,” senior Matt Lancaster said.

The team spirit within created something unforgettable for both players and coaches. The team’s time together helped mold them into the unit that took the field every week.

“These moments are unforgettable, and I can’t thank BVW enough for offering me them to me,” Lancaster said.

The coaches noticed the boys work on the field and in the weight room and the student body’s support in the stands.

“The boys got to see all of their hard work pay off, and the student body got to have a memory that will last forever. After fifteen years of doing this, I know how rare it is to have those experiences,” Coach Danny Catanzaro said

As this chapter of BV West football came to a close, coaches and students revealed that they’d learned from the experiences of this unique year and with the impact of the pandemic and putting in hard work to reclaim their efforts that were lost last year. Lessons learned throughout the wins and losses produced meaning to the players’ everyday lives.

“[I learned that] no matter what problem you’re facing, you have to trust that [your teammates] will do what needs to be done,” senior Joey Curtis said.

Several senior players found profound meaning to their time on the field.

“The biggest lesson I learned this year is that what people think you are, does not matter,” Darche said.

After this special season, the players vowed to continue to work together in the offseason to build on the bond between the teammates. If the underclassmen hoped to improve on the performance their coaches believed they’d need to put in some additional training.

“That BVNW team pushed [the football team] around in the second half. [They] weren’t physically ready to beat a team like that. This offseason needs to be a great one if we want to fulfill our potential next year,” Catanzaro said.

BV West football helped revived student life with the anticipation of being able to sit and watch the 20-year-old tradition come to life after being dormant for a year. Winning regionals, sectionals, and achieving the status as substate runner-up, this season colored BV West in spirit.

‘“[Football has] taught me that the experience outweighs the ending,” Lancaster said.

Despite ending the season with a loss, Coach Catanzaro also expressed gratitude.

“I am so thankful to have had the opportunity to coach this team. I am really proud of our season and the experience that we were able to provide all of the BVW students,” Catanzaro said.

Charlie Mahony us focusing on the upcoming hockey season. Matt Lancaster has already started to focus on boys’ wrestling and aims for an individual State championship. Joey Curtis is focusing on school and will attend college at the University of Arkansas.