A take on what defines modern patriotism in 21st century America. 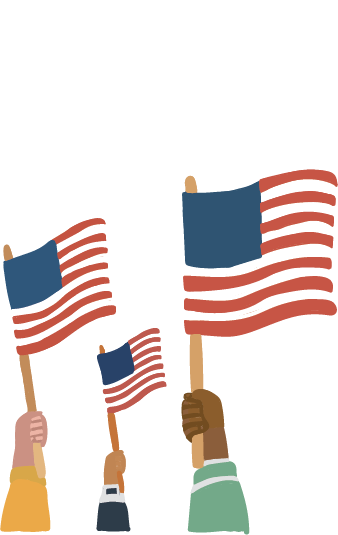 Monday morning, 7:45 a.m., the last bell rings.
“I pledge allegiance, to the flag, of the United States of America,”
Most of us remember standing at our seats in elementary school, facing the American flag hanging on the teacher’s whiteboard, hand over our hearts.
“And to the Republic for which it stands, one nation under God, indivisible, with liberty and justice for all.”
Students are taught from a young age that America is “the land of the free” and that we should be proud of our history. America is supposed to be the shining star; America is the example. Unfortunately, in the last few years, America is the laughing stock of the global media. The issue of patriotism has been muddled.
After #MeToo, George Floyd, and Jan. 6, how do Americans express patriotism in the 21st century? What is patriotism in 21st century America? Where do we begin?
The Google definition of patriotism states that it is the feeling of love and having a sense of attachment to your country and a connection with other citizens. With all that has happened in the last 12 months, America cannot live up to its original ideas of patriotism because the relationship between the United States citizens is broken. The definition of patriotism also fluctuates with contemporary generational issues and relevant events that occur. For example, most of Generation Z’s parents faced the Cold War’s aftermath and experienced 9/11 in their time. In contrast, Generation Z has faced a global pandemic, disuniting politics, and impactful social media movements. Views of patriotism are bound to change as time progresses, and what is evident is that many people grasp on to the ideas that have been fought on multiple various fronts for their immorality and continue to promote them.
The concept of patriotism Americans are taught is no longer applicable and cannot even match the Google definition.
Loving this country or being patriotic means that we must correct the flaws that are hurting the country and that we can give constructive criticism to one another. We, the people, need to do better, and our elected leaders must do better as well. The persistent problem of racism has continued since the dawn of the country’s independence: it contradicts all America stands for. Slavery defied justice, and the continued racism that persists today defies justice. Ignoring that these issues exist is not patriotism. The people were given the right to speak.
As Bryan Stevenson said in his memoir, “Just Mercy,” “We are all implicated when we allow other people to be mistreated.”
There does not need to be violence or harassment. When something is wrong, civil discussion is an option. Whether that takes the form of a protest, writing to a representative, or talking it out on social media, there is a way. After all of the calls for unity, it seems we are more divided than ever. It is genuinely hard to make progress on health care, the economy, infrastructure, or advancing social justice when there is so much conflict between parties and ideologies. Both parties either offer lipservice with zero action or contribute to maintaining a legacy of heavy-handed oppression.
January 6, 2021, the election was due to be certified by the senate.
President Trump holds a rally inviting his supporters to “save democracy.”
January 6, 2021, 1:26 P.M
Trump rioters reached the Capitol.
While millions of people claim that the insurrection was an act of “patriotism,” the rest of the world views that it was an act of domestic terrorism. Threats to lawmakers, vandalism, theft, and five people died on Jan. 6. What America witnessed on live television and through live footage on social media has awakened America with a jolting alarm that can no longer be snoozed.
We are all witnesses to how patriotism has been morphed into division and destruction. America is so divided that when one crucial movement starts, there is suddenly a countermovement purely made of spite with zero purposes. American citizens are eating each other alive. This issue did not just begin recently; this was just the tipping point for America. This debate over what patriotism is to different generations of America causes polar bipartisan fighting, which is ultimately the fall of our democracy if it continues.
Hopefully, this event will spark change in the eyes of lawmakers and citizens alike. If there ever was a wake-up call for Generation Z, it is right now.
As the upcoming adults in this world, Generation Z has an obligation to stay awake and act upon realizations of generations before and to mend our cultural relationships and reconcile our collective ideologies. One day, in the near future, American citizens will be able to see each other eye-to-eye without violence, threats, or insults. In the end, what will the history books say about patriotism? What will Google or Webster Dictionary say? Right now, America has a lot to process, but America needs to come to a decision on how it will define its national pride and identity. America needs to heal, and when it is ready to be fixed, Generation Z has to be ready to mend the broken bonds that currently divide America today. To emphasize, it is completely fine to be patriotic and love the country, but to love, one must recognize the faults that are hurting others and understand that the people were given the authority and autonomy to fix America as a whole.