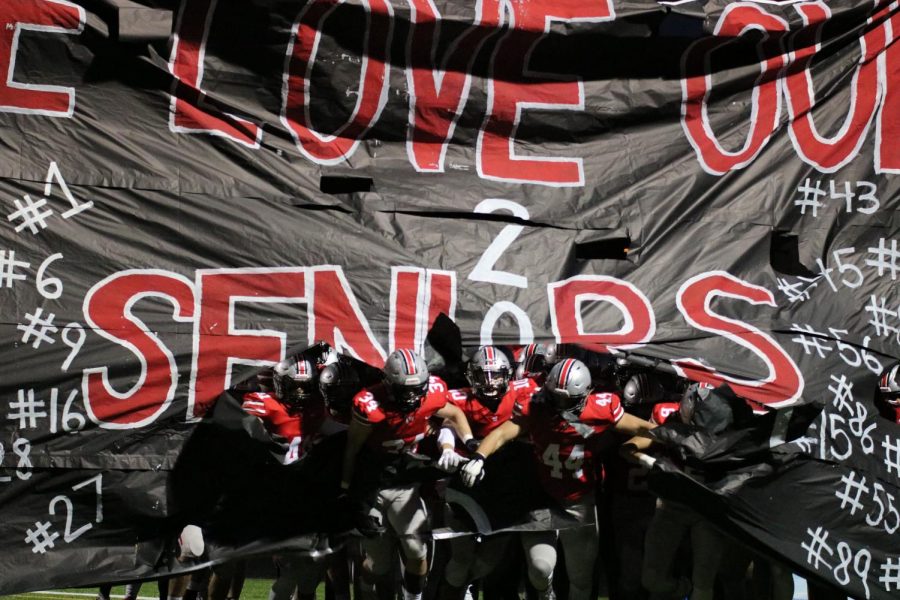 Seniors break through the cheerleader's Senior Night banner on Oct. 25

There were 62 football games played on Nov. 8, yet the KC Star chose the highlight the Jaguars win over Shawnee Mission Northwest on the stellar play of senior David Brown. Throughout the regular season, Brown posted respectable numbers while often being double and triple teamed. Friday night, he took his play to another level.

“It’s the playoffs,” Brown told Star reporter Todd Engle. “It’s time to ball out. We’ve got to go win the State championship, so we came to play. They were taking the run away, so it was like, ‘Throw it to me, and I got you. Let’s go.”

Brown scored four receiving touchdowns. Senior Riley Cummings scored on a run play in the first quarter to tie the game after SMNW got off to an early lead.

The Jags play Olathe North at the Olathe District Athletic Complex on Friday, Nov. 15 @ 7 p.m. in the 6A quarterfinals.

Read the entire article from the KC Star: https://www.kansascity.com/sports/high-school/article237045244.html