Grief. Despair. Hopelessness. Hardship. So many people have been there, and know how difficult it can be to overcome the adversity life throws at them. Healing is challenging, but if there is one lesson to be learned, it is that a new reality is possible. Difficulty is inevitable in day to day life, but many often don’t realize the toll that monumental, life-changing loss can take on others. The theater department seeks to reveal the truths behind how ordinary people learn to cope with extraordinary hardships in their fall repertory show, Ordinary People.

The play centers around a depressed teenager, Conrad, and his recovery from a failed suicide attempt following his brother’s accidental death. The dramatic show will take place Sept. 30 and Oct. 1. Yet, it is a show that has been a long time in the making.

“I’ve wanted to do this play for about ten years,” theater director Laurie VanderPol said.  I’ve kind of been looking for the right time, the right cast. I read the book too and I’ve just never forgotten it. It was a beautiful piece.”

The theater department is known for their dramatic, resonating, enjoyable shows, and Ordinary People looks to be no exception, bringing to light some very significant topics. As Conrad deals with survivor’s guilt after witnessing his brother’s death firsthand in a boating accident, various scenarios unfold with his family, friends, and other characters that are fascinating to watch. Junior Alex Leondedis, who plays Dr. Berger, the psychiatrist who helps Conrad overcome some of his struggles, understands the importance of communicating these topics.

“When a show gets emotional like this, it can either be done really well or really poorly, and I think with the cast that we have, we’re looking towards really well executed emotional scenes,” Leondedis said.

With a talented cast taking on mature, profound roles, there is no doubt that the audience will be filled with emotion. Each student involved in the show seeks to make their passion for theater evident in every performance, and they work tirelessly to create the best shows possible. Rehearsals throughout the school week and the dedication of every cast member is clearly seen when the actors and actresses take to the stage, seamlessly illuminating the many themes a show like Ordinary People deals with.

“We’ve all had those times where we feel like it’s the end of the world and we’re at rock bottom,” senior Zane Champie, who plays severely depressed Conrad, said. “We’ve all had to seek out someone to get help or have had to find our own journey to recovery from hardships, whatever the degree of severity is.”

As the storyline progresses and some of these more severe conflicts aside from Conrad’s suicide attempt begin to surface, the difficulty and relevance with which his decision affects everyone around him is exemplified.  Although his recovery is pivotal, seeing how much of an impact it has on his family and friends is truly eye-opening.

“We learn about the warning signs of suicide and we learn what to do before it happens, but I don’t think people know how to deal with it after someone’s tried to commit suicide and recovered,” senior Haley Bates said.

Bates’s character, Conrad’s detached and narcissistic mother, struggles profoundly to deal with this recovery and make sense of the tragedy. Her healing process, and many others illustrated throughout the play, speak volumes to the idea that there is no one way to grieve, and that individual coping mechanisms are prominent in each character.

“Berger and Conrad have this really interesting relationship where Dr. Berger, Conrad’s therapist, insights chaos so that Conrad can eventually get more control,” Leondedis said of the dynamic between two of the characters in the show. “I think that is almost what is most beneficial to Conrad’s health and what helps him get better in the long run.”

When individuals open themselves up to alternative solutions, the possibility of receiving life-changing help increases immensely. Many times, it seems easier to pretend that hardships are nonexistent, but this proves a detrimental tactic for many characters.

“They [Conrad’s family] have to remember the loss of their son, even though a lot of the characters are trying to get rid of it and move on like things never happened,” senior Charlie Meacham said.

Each actor recognizes the unhealthiness of the coping mechanisms that different characters use and the need to turn towards healthier habits.

“At the beginning he’s [Conrad] trying to sweep it under the rug, but eventually he learns to seek out help and ways to really heal,” Champie said.

The progression of each individual towards healing is one of the standout ideas illustrated in the show. The journey towards recovery is undoubtedly rocky  for each character, but the strategies they develop to cope depict the reality of how real people react to and deal with losses as well.

“It’s just is so interesting to look at the things that people do that reject or turn other people away from you,” VanderPol said. “You’re not going to get help if you don’t open up and let yourself be a little vulnerable. So, that’s the bad part of healing, and that’s kind of what we’re seeing in the show is the trauma of just trying to feel all those feelings.”

This concept, intricately woven into the play, holds much more meaning than simply that of actors taking on a different persona for a show with the sole intention to entertain. Its relevance to students is monumental. Depression and suicide are two very real issues that many students struggle with and are topics that often do not get the attention needed. The Ordinary People cast holds these issues close to their hearts, and knows that the messages in their play are messages students yearn to hear. The clear need for support and care from loved ones is evident throughout the show. “We like to call ourselves a big family in theater and I just can’t wait to keep working with these guys,” Meacham said.

Meacham, who plays Conrad’s cautiously optimistic father, acknowledges the friendships he has developed in the theatre department. It is friendships like these that are often crucial to overcoming the struggles life brings and working through the pain towards a better outcome.

“Even though you might feel down at times, you have friends and family that care for you,” Meacham said. “They’re going to do whatever they can to help you get better. I just want the audience to know that they have so many people in their lives to go to if they ever feel down or anything.”

Vanderpol stresses the need to be connected and rely on those friendships when life gets difficult as well.

“The redeeming, helpful qualities, the support of friends, are so important,” VanderPol said. “You can’t get through these tough things without friends.”

Truly, the title of the play, Ordinary People, is fitting. Although the battles each character faces on stage are extraordinary, their stories hold an incredible sense of normalcy. Life is difficult, and finding support and hope in the midst of devastation is a monumental challenge. However, as Ordinary People illustrates, recovery is achievable. 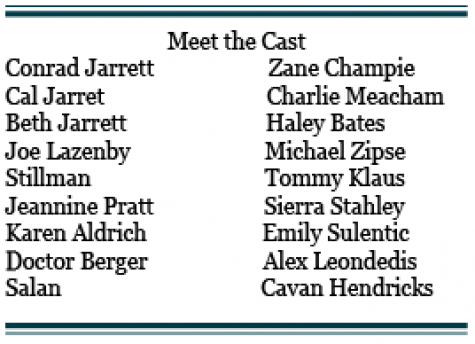 September is National Suicide Prevention month. In Kansas, suicide is the second leading cause of death for people ages 10 to 34, according to the American Foundation for Suicide Prevention.  Suicide is a real issue among teens everywhere, and the steps to prevention are knowledge that every student should be aware of.

Students that are struggling are often unaware of the resources and the different types of support that are accessible to them both inside and outside of school.

“We have a list of different therapists and we’ve made relationships with them, so we can always recommend, or if someone is looking for somebody specific, we can give them feedback on who to see,” school counselor Kimberly Urenda said.

School counselors and trusted adults can provide crucial tools as well as different opportunities for students to receive individualized help. The district has established distinct protocols for suicide prevention, and is connected to various sources that may be beneficial to students. Recovery is achievable if one seeks help and finds healthy ways to deal with their struggles.

“We’re all unique humans and we all have different ways of dealing with things,” Urenda said. “Some are more healthy than others. The healthier coping mechanisms are talking to others and somehow processing it verbally and getting it out of your system.”

Talking to others and reaching out for help can be difficult, but there are countless people available to talk to students in need. Sharing information with counselors, therapists, friends, family, teachers, or any other trusted adult can make all the difference.

“When people don’t want to talk about things that have impacted their life or have been traumatic, that’s where people start trying to hide their emotions, cover them up, or numb out,” Urenda said.

Students that may have a friend who has come to them regarding a struggle with depression or potentially dangerous issue they’ve been dealing with are encouraged to speak out.

“Don’t take that on yourself,” Urenda said. “That is such a big secret, and it’s not a good secret to keep. Being a good friend and listening to them is very helpful, but also telling a trusted adult or going with them to tell someone is very beneficial as well.”

Above all, it’s important to recognize that no student is alone. There are numerous resources available to any individual in need, and reaching out to adults is a necessary step towards a lasting recovery.

“The big thing is asking for help,” Urenda said. “It’s okay to ask for help because we all need help at times. It’s not a sign of weakness, it’s a sign of strength.”

-changes in eating or sleeping habits

-lack of interest in future plans

-suicide threats or talks of death

This past weekend, friends and family of 2016 alumna Lane Marrs learned of her passing.

Lane was an active member of the cross country team her senior year. She was a student at the University of Arkansas and had just pledged Alpha Omicron Pi.

“Lane had a lot of friends [at West] and I want them to know that there was nothing they could have done,” said Jan Marrs, Lane’s mother. “Lane’s biggest problem wasn’t her depression or her anxiety, it was that she wouldn’t talk to anyone who could help.”

“Lane was very special to our school and she will be dearly missed,” Potts said.  “We are a strong community and at a time like this we must work together to provide guidance and support for our students.”

Services for Marrs were held at the Church of the Resurrection on Friday, Sept. 23.

A candle light vigil was held on at the University of Arkansas on Wednesday, Sept. 28.

The Marrs family has set up a GoFundMe page. Funds collected will go to help other teens battling PTSD, anxiety and depression. The fund has already surpassed their goal of $15,000 by raising almost $43,000 to date. If you’d like to help information can be found at this address: https://www.gofundme.com/lanemarrsmemorial?rcid=0f3b9f627ed911e6b09abc764e049a64

Social media has been the method of communication for gaining information, showing comfort and expressing grief. @bvwspotlight has had a plethora of Tweets about Marrs and her sister Carlie, a sophomore cheerleader.